A few years ago in North Texas we had a very unusual event the day after Christmas–a tornado.  This one was particularly devastating as it ripped through neighborhoods leaving a path of destruction, city after city.  During the weeks that followed the tornado, you could drive the neighborhoods hit hardest and see the restoration process in action.  People cleaning their yards and heaping rubble on the curb.  Roofs being tarped and prepared for repair. Temporary fences being put up to enclose swampy swimming pools.  But at other homes, there was no activity at all. These houses had a big red X painted across the door, indicating that the structure was “condemned.”  A house being condemned meant that the damage was so bad it was now “unfit for use.”  Nobody was to enter. The house would never be used again.

It has been my experience that many Christians feel as though they have things in their past that have resulted in a spiritual red X on their souls.  It might be a series of decisions and actions, or one large moral failing, but the imagined result is the same–they consider themselves condemned. Unfit for use.  If you feel like God can’t use you, I have good news. God does not have a “Building Inspection Department” that condemns Christians.  As a matter of fact, there is now no condemnation to those who are in Christ Jesus (see Romans 8:1). 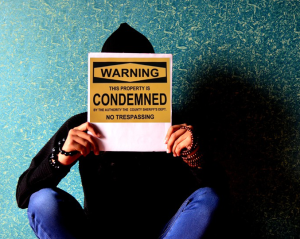 It Happens to the Best of Us

Let’s take a look at how Jesus responded to one man who committed a quite infamous sin.  We might say it was the ultimate disqualifying act of cowardice and betrayal.  Peter had just declared that he would go to prison or death before he would leave Jesus’ side.  That same evening, as Jesus was in custody, we are told that Peter followed at a distance.  The next morning in the courtyard, Peter denied even knowing Jesus three times!  The Bible says that Jesus looked straight at Peter in that moment.  Peter was devastated.  He ran away and wept bitterly.  Peter had failed to do what he knew to be right.

God’s in the Restoration Business

Now, let’s fast forward to after Jesus’ victorious resurrection. Peter and several other disciples were fishing on the Sea of Galilee.  The resurrected Jesus appeared, to their delight, and spent time with them over a nice fish breakfast. Then He had this exchange with Peter:

When they had finished eating, Jesus said to Simon Peter, “Simon son of John, do you love me more than these?”

Again Jesus said, “Simon son of John, do you love me?”

He answered, “Yes, Lord, you know that I love you.”

The third time he said to him, “Simon son of John, do you love me?”

Peter was hurt because Jesus asked him the third time, “Do you love me?” He said, “Lord, you know all things; you know that I love you.”

Jesus said, “Feed my sheep. Very truly I tell you, when you were younger you dressed yourself and went where you wanted; but when you are old you will stretch out your hands, and someone else will dress you and lead you where you do not want to go.” Jesus said this to indicate the kind of death by which Peter would glorify God. Then he said to him, “Follow me!” (John 21:15-19 NIV)

Peter had boasted of his reliability in front of the disciples at the Last Supper, then failed miserably by denying Jesus three times. Now he needs to be restored to ministry among them, but Jesus requires Peter to humble himself. So He asks Peter to acknowledge and commit to Him three times.  Three times Peter denied Jesus (his personal rock bottom), and now three times Jesus asks for commitment.  Jesus didn’t ask Peter, “Are you sorry?”. He didn’t say “Promise you’ll never to do that again!” Jesus challenged Peter to love. Jesus restored Peter in the presence of the other disciples by making him face his failures, without being condemned. Instead of chewing him out or making him feel bad, Jesus challenged Peter to set his eyes on the life ahead of him. He had failed in a big way. But Jesus confirms that God still has plans to use him in a big way in the future. What a wonderful example of grace!

What We Can Learn from Peter

My aim is for you, if you have been frustrated having heard doctrinal debates, denominational positions and theological speak, to come; and leave encouraged and enlightened by the life changing truth of the Bible presented in a clear and concise way. Feel free to subscribe or leave a comment. God bless!
%d bloggers like this: